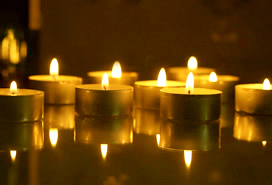 
We headed downstream for the ride of our lives. The first few rapids spun us around backwards. We paddled hard to resume our position, but before we could get straightened out, we hit more rocks and were swept through another series of rapids sideways.

“Huge drop-off, dead ahead,” I called out.

It happened fast. Our raft took a vertical nose dive down a six-foot drop. White splashing waves thundered all around us. Sandi, who was in the back of the boat, couldn’t hold on. She tumbled forward and knocked both of us into the water.

I could hear bubbles rushing over my ears; then only muffled silence. The freezing cold waters crushed my chest like a vise. I couldn’t tell which way was up.

Eventually I rose to the surface. I could feel the warmth of Sandi’s body against my feet five feet under. She was caught in the undertow. I could barely breathe, much less think. All I could do was raise one arm and grab the raft before it floated away. Helpless, I was swept downstream.

Jagged rock formations appeared from out of nowhere. The raging waters sent me crashing into them without mercy. I was scared to extend my feet out in front of me for fear my legs would be ripped off my body. I hit one massive boulder after another with devastating force.

My mouth was praying the entire time, but as soon as I started hitting rocks, my spirit kicked into high gear. I could hear my spirit-man crying out from inside of me with a one-word prayer, “God!”

Seconds later Sandi surfaced beside me and she was able to grab the raft. I climbed into the raft, and after spinning around, I pulled her inside. We lay in the bottom of the raft for several minutes trying to recover. When we looked up through the ever-changing water patterns that were splashing all around us, we realized God had worked another miracle. The raft had come to a complete stop in the middle of the river.

We were amazed. How does God stop a four-man inflatable raft in the middle of a river? There were large boulders and rushing waters all around us, yet we had come to a complete standstill. It took us a while to figure it out...

An excerpt from The Catholic Warrior

After thinking about the vast beauty and magnificence of God’s grandeur in comparison to my emptiness, I was forced to make a decision. I could live my life with a cold heart, or I could invite the richness, beauty and splendor of the Lord to dwell inside of me.

Eventually, I made a decision for Christ. I centered myself in deep prayer and recalled the vision of the tiny heart. I spoke the words from the core of my being: “Dear Jesus, I confess you as my Lord and Savior. Please do anything you want with my life. I surrender everything into your hands. Come into my heart and create in me the kind of person you have intended me to be.”

After my prayer time, I didn’t feel any different. The vast ocean of God’s great love didn’t fill me to overflowing, and soon I began to worry. I called a spiritual friend to pray with me. She invited me over to her house, and after I shared the vision with her, we decided to go to the mountains and pray some more.

We drove about 30 minutes, and after parking the car, we walked up a dirt road toward the top of the mountain. The sun was about to set for the evening, and the sky was illuminated in a thousand different shades of yellow and orange.

After we arrived at the top, we sat on a rock outcrop and watched the sparkling city lights below. With the unspoken words of my inner being I invited Jesus to come inside. In the same way a man falls in love with a woman, I opened up my heart and fell in love with Jesus. I surrendered the core of my being to him. I made myself vulnerable to him in every way, as I gave him my everything.

Immediately, I could feel his euphoric strength enter into me. It was just like Jesus had promised when he said, “Those who love me will keep my word, and my Father will love them, and we will come to them and make our home with them.”

The divine presences of Christ had finally filled my heart, and the next day, I was on a spiritual high. I could actually feel the presence of Jesus inside of me. Whenever I started to pray, a great wellspring of living water would rise up inside of me...


An excerpt from Healing Power for the Heart

One day I received a phone call from the house manager at the Rescue Mission. I could feel the panic in his voice as he said, “Amber was attacked last night. Apparently she had been arguing with some guys earlier that day. We think one of them came back at night and tried to kill her when she was sleeping.”

“The perpetrator used a cinder block. Amber lay unconscious all night wrapped up in a bloody blanket. The guys who found her said they could see her brain exposed through the large gash in her skull.”

“After we called the police, the paramedics took her away early this morning. I tried contacting several hospitals, but no one would give me any information.”

“Thanks for letting me know,” I said. After getting off the phone with the man, I immediately started calling around. It took about an hour, but eventually I found a woman named Jane Doe who had been admitted for head trauma at Denver General.

Upon entering her room, I could barely recognize Amber. Her face was swollen, and her nose was broken. She had black and blue marks underneath both eyes. The nurses had shaved her head so surgeons could repair the trauma to her skull. The heavy black stitches they used looked like train tracks running across the side of her head in a semicircular pattern.

All during this time I had been praying, “Oh God, please help Amber,” but deep in my heart I lacked the spiritual strength to pray effectively. No one thought Amber was going to live, and before long, I started preparing myself for the worst-case scenario.

To make matters worse, I felt guilty for the way I had left Amber the last time I’d seen her. I was dropping off some paperwork a few weeks prior. She was standing on the sidewalk waiting for me, but after spending more than a year trying to help her, I had given up hope. I felt like I was wasting my time. I was mad at myself and disappointed with her progress, so after handing Amber the papers, I drove off in an impatient rush. I could hear her calling out to me from the sidewalk, “Wait Rob… Rob.”

As I stood in the hospital room looking at Amber, I felt terrible and partly responsible. All I could do was stop by and visit her to see how she was doing, but every day her condition got worse.

I continued to pray for Amber, but my prayers lacked the necessary power of faith. I didn’t think Amber would live, and my negative attitude was hindering my ability to pray for a miraculous recovery. To make matters worse, my heart was hardened. A part of me didn’t want to see Amber back on the streets, causing more problems.

Eventually, I was able to work through my negative attitude and get back into my heart. A few days later, a lady from my Bible study group offered to go with me to the hospital and pray for Amber. We were able to pray with love in our hearts. We interceded on her behalf and asked God to forgive all her sins. I took a bottle of anointing oil along, and when the nurses weren’t looking, I anointed Amber’s head and hands.

After we anointed Amber with oil and prayed the prayer of faith with love in our hearts, Amber started to recover. The next day she regained consciousness and began breathing on her own. A few days later, she could sit up in a wheelchair by herself. Within two weeks, she was strong enough to start fighting with the nurses. On several occasions, the medical staff had to sedate her and strap her to the bed, because she tried to leave the hospital with the feeding tube still attached to her stomach.

Six months later, Amber had made a complete recovery. God worked a profound miracle, and all we needed to do to access the Lord’s healing power...

An excerpt from The Healing Power of Jesus